This past spring Neighborhood Film Company and Giant Spoon teamed up with littleBits Electronics to create a commercial for their new Star Wars themed “Droid Inventor Kit”. The commercial, shot in local Havertown, is for a new kit that allows kids to assemble their own R2D2. For Production Designer Tim Stevens, a Delaware County native, this came close to his ideal job. “(Return of the Jedi) was what got me wanting to be in the film business in the first place,” said Stevens during a recent chat at Expressway Cinema Rentals. “I saw it when I was a kid, when I was young, and came home and would build little sets. In the back yard, or in the forest, or wherever, and pretend to make movies out of them.”

Now as a professional, Stevens could return to those same woods, and a passion that made him the perfect candidate to create a set that felt authentically “Star Wars”. When he officially got the job, Stevens couldn’t wait to get to work. He went home, put on the iconic John Williams soundtrack and began building toys. Collaborating with the director, Marcus Tortorici, the plan going in was to emulate a J.J. Abrams’ style production. Abrams is well known for paying homage to great directors Steven Spielberg and George Lucas, so Stevens suggested they go back even further and pull inspiration from E.T. and The Goonies, and of course the original Star Wars trilogy.

So, Stevens got to work on making that happen. He bought and assembled the bike that the paper boy character rides on, intentionally purchasing the brightest orange he could find. The idea, of course, was for the character to emulate an X-Wing pilot.

The commercial, although short, expertly evokes the feeling of youthful camaraderie felt so acutely in E.T. and The Goonies. It does so by having a young girl follow the droid stencils left by neighborhood kids in the know, all while trying to keep pace with the X-Wing paper boy. 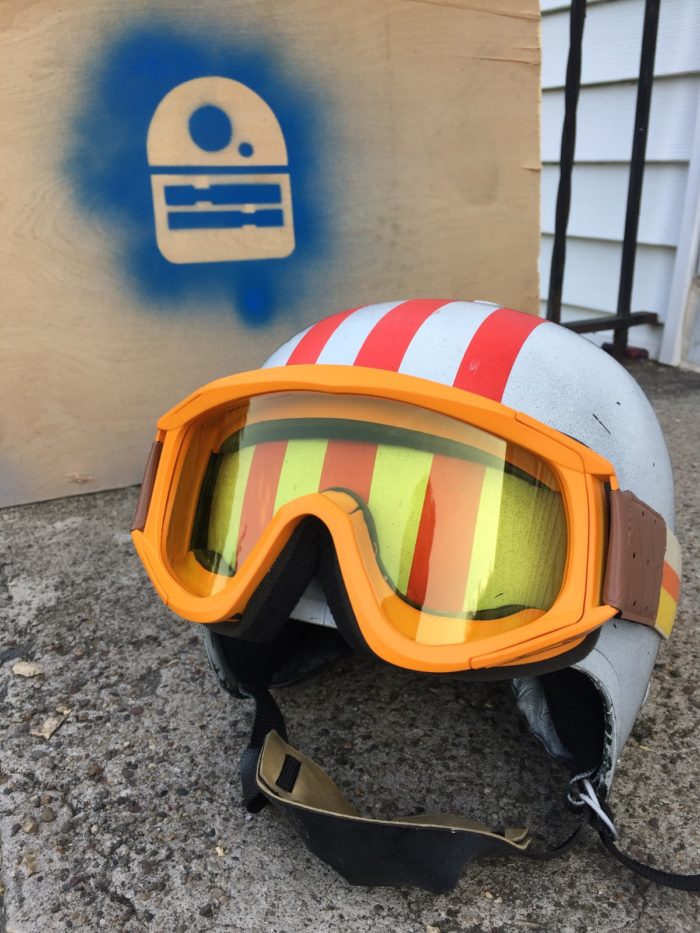 Stevens job description was more complicated than just making toys obviously. As production designer working on such a sacred brand, Stevens was stretched to find the most appropriate set pieces to meet expectations and satisfy all parties involved.

At the beginning of a project, he said, he begins to make a list of things he might like to see. He brainstorms with the director about what they might be able to implement, and then goes about making it happen. However, on a project like this, it isn’t always just as simple as being on the same page as the director.

For the final scene of the commercial, a meet up of the neighborhood kids in the properly marked basement, Stevens wanted to emulate the Jawa Sandcrawler from A New Hope. He cluttered the set, hung things from the ceiling, and fully outfitted the set to be as cool and authentic and he could possibly imagine. But balancing a personal vision with the marketing and branding needs of a client is complicated, especially with such a high profile and scrutinized brand. “About 25 percent of my original dressing made it into the final set. For safety reason, legal reasons, branding reasons, all kinds of stuff. It was Lucasfilm, Disney, Little Bits, and then the agency. There are a lot of people tasked with protecting the quality, legacy and authenticity of that iconic world and it was challenging at times.”

Such is the life of the production designer. For Stevens, his best advice is to have thick skin. He says that in his capacity he must understand when to pick his battles. If he decides he really needs one aspect of a set, he will fight for it, but knows its a give and take. Therefore, it is essential to be a good communicator and you have to learn to roll with the punches.

“They had this wall mounted shelving system that comes from littleBits, and you can buy it at the store.” said Stevens, describing one particular instance on set where his ingenuity was tested. “So I was thinking why don’t we just suspend it from the air, so we don’t have to build a wall here. It would save us time and budget and I thought it would look great. The agency was like, ‘no it has to be on a wall’. Ok, but we are really up against it at this point…If it has to be a wall, what’s this wall supposed to look like?” Stevens got a clear direction from the agency about why it needed to be a wall. Apparently, a selling point for parents is that it can hang on any wall in their house. “Got it, ok,” said Stevens. “Now that I know what we’re doing, I can make it look like that.” He made a quick sketch, sent someone out for lumber, and it worked out great.

Navigating a complicated process was clearly worth it for a huge fan like Stevens, who was excited just by having his designs approved or denied by Lucasfilm. When he first got on the phone with the production team, they spent the first hour geeking out about working for Star Wars.

From Stevens’ perspective, Philadelphia is an exciting and fun place to create content right now. Local companies have grown their foothold on the market in producing commercials for large brands like this. The current crop of production companies working in the city, he says, have a positive and proactive attitude about enhancing the Philadelphia market.

“I think it’s aggressive people pushing to get Philly the work that Philly can do,” said Stevens. “It’s an attitude that says, ‘let’s not worry about where the work is, let’s just go get it and bring it here.’”
In his eyes, there’s a “shut up and go get it” mentality that is infectious about our industry here. An attitude that clearly has guided Stevens himself during his work on this commercial. Having to obtain permission for set pieces from four distinct groups that all have their own vision can be a challenging endeavor to navigate. It requires ingenuity to think quickly for viable solutions, and a resolve to persevere.

“There’s a wealth of talent is in this city for sure. And people who are willing to do the work with smiles on their faces,” said Stevens. Before his prolific blogging career, Joe was most well known for his exploits as a famous professor, archaeologist, and adventurer; notable for his trademark bullwhip, smoking jacket, and fear of snakes. Joe was in the Boy Scouts, and that is where he found a love of Archaeology, trying to recover the Cross of Coronado from people whom he suspected to be grave robbers. During the ensuing chase, Joe developed his fear of Snakes and quickly mastered a Bull-whip when he had to go face to face with a Lion on a circus train. Later, Joe would recover the Cross of Coronado and donated it to a museum as an important historic artifact. Now he works at Expressway.